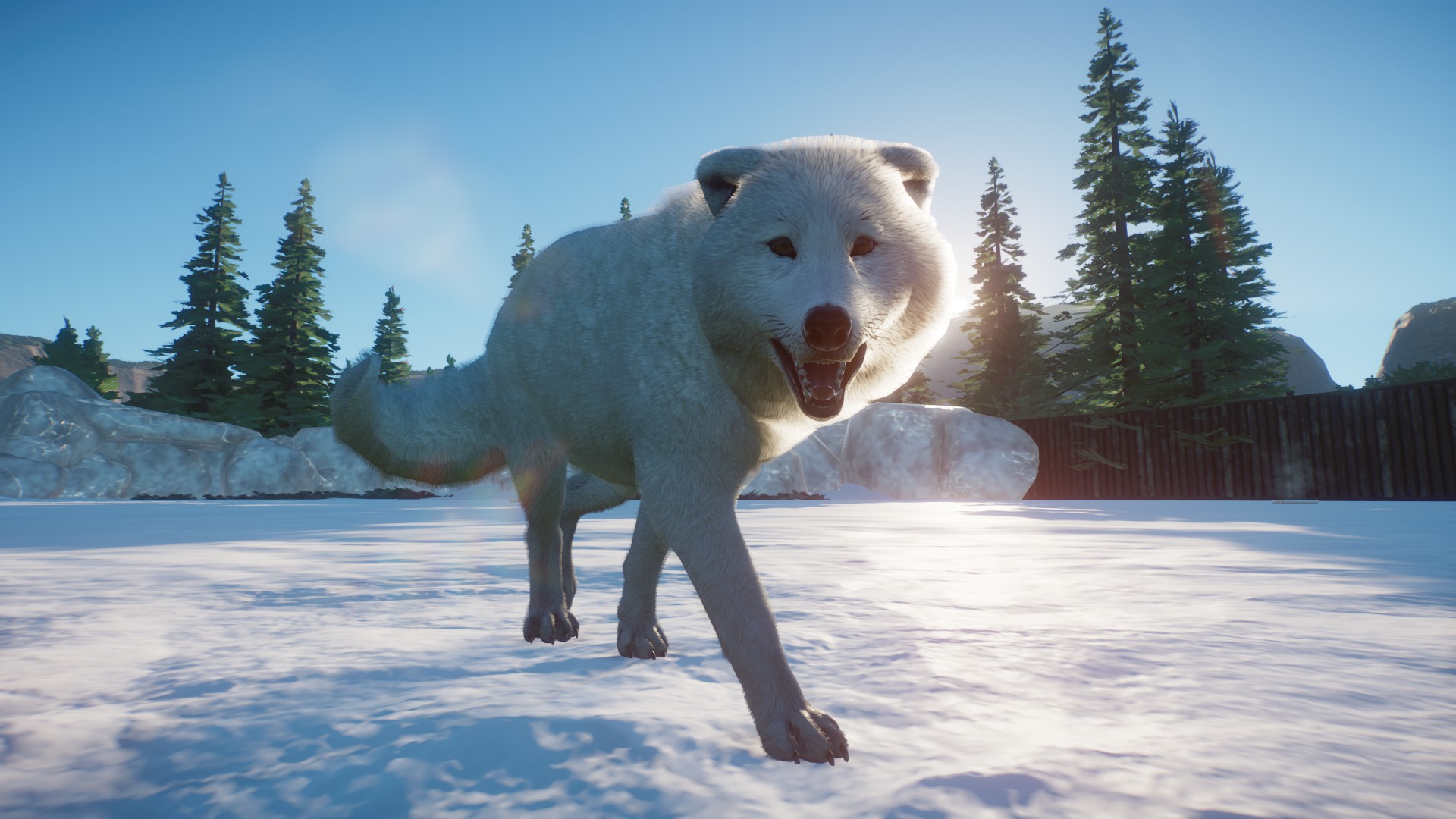 Note: Because this mod accesses Main.ovl and so does my polar bear space reduction mod, I’ve packaged the polar bears needing less space (about 2,500 and 500 per each additional individual) into this mod. In theory these mods should only work offline. In franchise mode, buying arctic wolves should end you up with wolves that look fox-like.

The arctic foxes include:

A tiny custom mesh! They aren’t distorted weird looking wolves. 🙂 It completely changes the scale of the skeleton. LODs with no issues. Females have a different mesh than males. The in-game camera has been adjusted to accommodate their new size.

Elegant animations – Several offset/enrichment sizes were changed so that the fox runs like a fox, plays like a fox, and can interact with the enrichment items fluidly. The only issue is its bottom jaw clipping into things it is holding in its mouth, but its a minor nit-pick. 🙂

Custom Sizes – The crate the fox comes in is tiny, its food is the smallest meat size, the cost of feeding reduced (they are only 7-21 lbs/3.2 to 9.4 kg), and its space needs are 650 with 50 per additional fox. Even the dung is tiny! You will see both pint sized tiny foxes and pet 22 pound foxes reflected in your purchases, randomly.

Confident Behavior – Wild arctic wolves tend not to be shy as they’ve never seen people, so in game foxes both wild and domestic are more curious than fearful! They are not prone to stress from guests any more than wolves are. (But guests can’t walk in their enclosure/will run from them escaped.)

Packs and Breeding – A pair prefers to mate for life and will briefly morn the death of its mate for ~3 in game months before taking another. You can keep 3 males together, or 3 females, or 1 male and 2 females. They will form a pack and argue when new babies are born. Unfortunately, the size of the wolf juvenile could not be changed- so instead of having tiny kits, arctic wolves give birth to smaller adults that GROW eventually reaching their adult size. (They skip the juvenile phase, like exhibit animals, but do grow!)

﻿﻿-In the wild, Arctic foxes change their pack size based on how much food is available. Mostly they pair up, with offspring staying only a year before finding their own territory- unlike wolf packs. They also changed based on region in the world, or if in a zoo. So to make it realistic, that is why one male who breeds with one female exclusively, with a separate female as a companion/helper. (For realism, you should make this their offspring from their first litter.

Scavenging and Fences – The Arctic fox will not take down reindeer (or other animals), and doesn’t require a high fence grade. However it will scavenge corpses that died from natural causes or were killed by other animals.

Installation:
Arctic Fox Download – Navigate to:
﻿C:\Program Files (x86)\Steam\steamapps\common\Planet Zoo\win64\ovldata\Content1\Animals\Dogs\Arctic_Wolf
Copy Arctic_Wolf_Female and Arctic_Wolf_Male and paste copies of these folders as a backup somewhere else, to change foxes back to to wolves later.

Backup your game:
Download the foxes, and overwrite the wolf files mentioned above from the “fox replacer” folder.

Then go to:
C:\Program Files (x86)\Steam\steamapps\common\Planet Zoo\win64\ovldata\Content1
Back up “Main.ovl” into another folder, then replace it with the contents of the “fox brains” folder.